At some point throughout 2017 I found, abandoned next to a dumpster, a typewriter. It was an Olivetti Studio 46, and some ungrateful person had thrown it away when he thought he couldn't get any more out of it. She was new, impeccable.

I took it to the office, not to give it a second life but, at least, to give it back the dignity it had lost next to some containers.

And that's where my interest in these wonderful gadgets full of ingenuity and with a thousand and one stories hidden between their keys was born. 1895
Yost Writing Machine Company
the typewriters Yost were manufactured by Yost Writing Machine Company of Bridgeport, USA. Its inventor, George Washington Newton Yost, was an important pioneer in the development of this type of machines. Before launching the models Yost, the entrepreneur produced other machines such as the famous Caligraph, one of the competitors […] 1896
Hammond
In addition to the curved two-row keyboard, which was eventually scrapped by the widespread prevalence of the dominant model that is still in use today, the machine was also provided with a universal straight two-row QWERTY keyboard. The later models, Nos. 6, 7 and 8, are quite rare and were manufactured (around […] 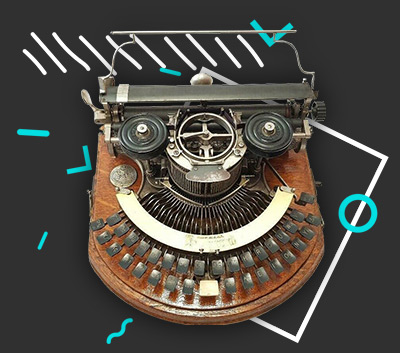 1896
Hammond
The Hammond did not have letter bars, since the fonts are in an interchangeable C-shaped socket, which made it possible to use different fonts and fonts on the same machine and to adapt to the specificities of all languages. When pressing a key, the letter was positioned in the center […] 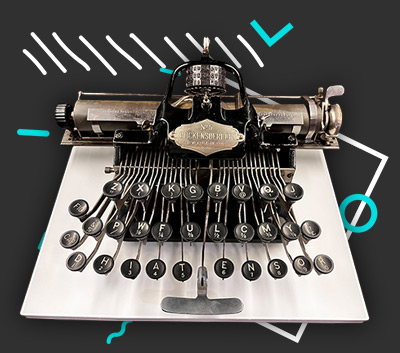 1897
blickensderfer
Serial number: 26830 George C. Blickensderfer (1850-1917) began designing typewriters bearing his name in 1893. The key feature of the Blickensdefer was its portability, lightness (with only 250 parts), ease of transportation. The layout of the keyboard was basically based on placing the most used letters in the lowest row (DHIATENSOR) […] 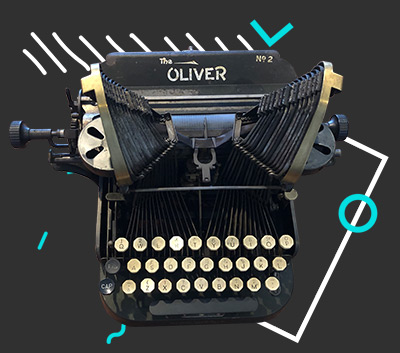 1900
Oliver
The Oliver Typewriter Company was an American manufacturer of typewriters based in Chicago, Ill. It has a very original mechanism based on lateral striking, very different from the mechanism found in the usual typewriters. The machines Oliver were considered the first "visible print", which meant that the typist could see the […] 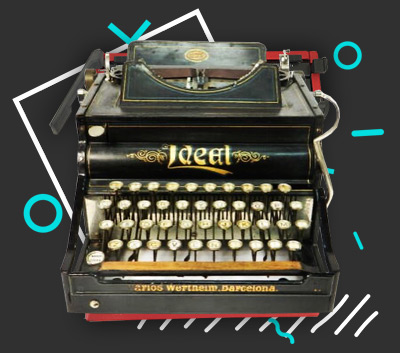 1900
Seidel & Naumann
In 1899 the German sewing machine and bicycle company of Dresden Seidel & Naumann acquired the patent rights from Americans Edwin E. Barney and Frank J. Tanner for a typewriter they had designed and which had been patented in 1897. production began in 1900. The Ideal A is […] 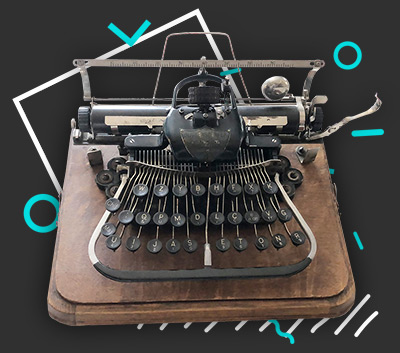 1901
View
George C. Blickensderfer (1850-1917) began designing typewriters with his name in 1893. The key feature of the Blickensdefer was its portability, lightness (with only 250 pieces), ease of transport. The keyboard layout was basically based on positioning the most used letters in the lowest row (DHIATENSOR) to increase efficiency. […] 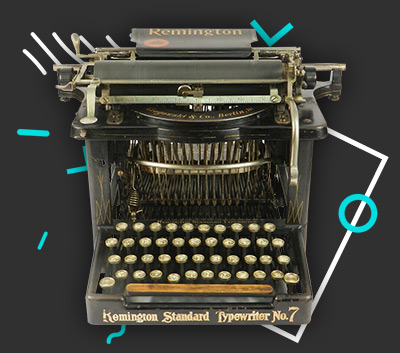 1904
Remington
Remington No. 7 typewriter, manufactured in 1904 in Ilion, New York, USA. The No. 7 is probably Remington's most common hidden typewriter (you have to lift the cart to see what's been written), with around 250.000 sold. Many of the Remington No. 7 machines were used […] 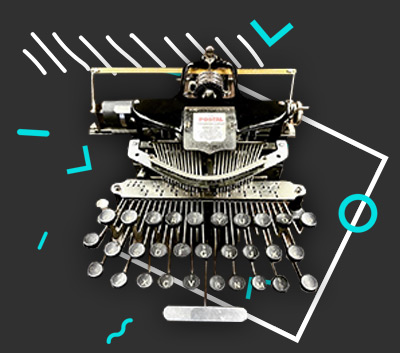 1906/1909
Postal Typewriter Company
Serial number: 35114 What would one get if they crossed a Blickensderfer with a Franklin and a Hammond?… A Postcard, of course! William Prehn Quentell (1861 – 1932), the inventor of the Postal, had few reservations about borrowing innovations from more established brands. Number 3 was the base model, while number 5, […] 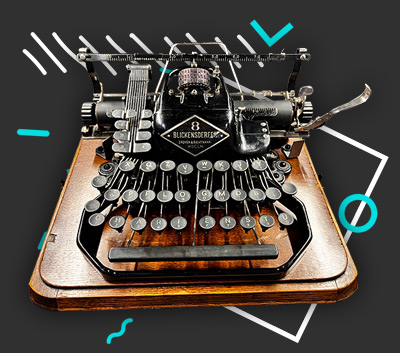 1907
blickensderfer
George C. Blickensderfer (1850-1917) began designing typewriters with his name in 1893. The key feature of the Blickensdefer was its portability, lightness (with only 250 pieces), ease of transport. The keyboard layout was basically based on positioning the most used letters in the lowest row (DHIATENSOR) to increase efficiency. […] 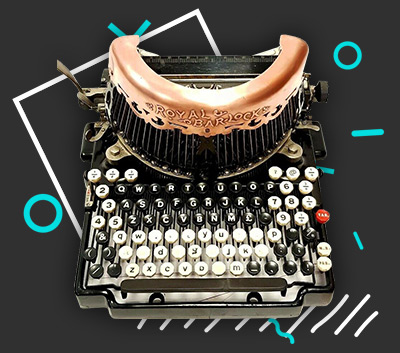 1909
Columbia
Invented in 1889 by New York watchmaker Charles Spiro, the Bar-Lock is a downward stroke design with a full keypad and front casing that covers the entire arc of the letters. It stands out for its double keyboard - for upper and lower case letters, and the ornamentation on the parte front of the […] 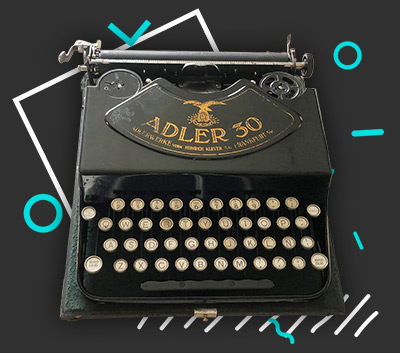 1909
Adler
Like other typewriter manufacturers in Germany, Adler he began his life as a bicycle manufacturer. When they decided to branch out in 1898, they did the sensible thing and bought a license to make America's "Empire" typewriter instead of trying to make it from scratch. the «Empire» was designed by Wellington […] 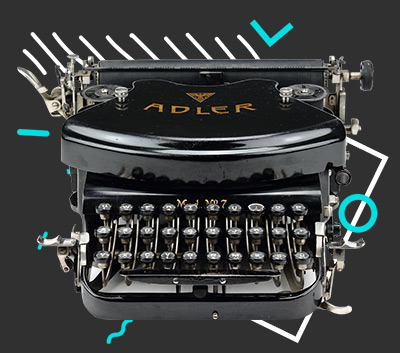 1910
Adler
Like other typewriter manufacturers in Germany, Adler he began his life as a bicycle manufacturer. When they decided to branch out in 1898, they did the sensible thing and bought a license to make America's "Empire" typewriter instead of trying to make it from scratch. the «Empire» was designed by Wellington […] 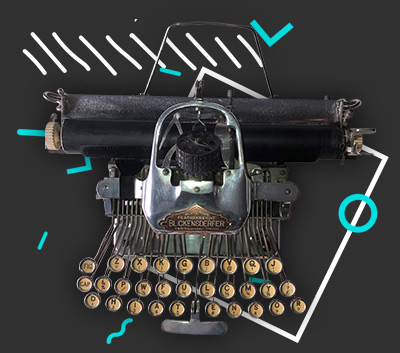 1910
blickensderfer
Serial number: 154141 In 1910 George Blickensderfer introduced the Aluminum Blickensderfer, which was cast in aluminum and was essentially a lighter version of the 6 using cast iron. The Blickensderfer is an early example of the use of lightweight aluminum in manufacturing. He also appeared as Blick Featherweight, who was a Model 6 […] 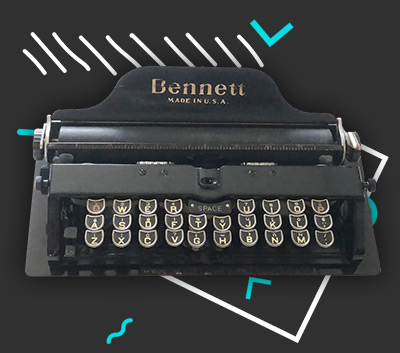 1910/1913
Bennett
These wonderful typewriters were invented by Charles Almon Bennett. The original patent was applied for on 25 octudder from 1899 and issued on March 26, 1901. The three-row keyboard is very unusual in that all the keys in each column go down when the top key is pressed. An arrangement of […] 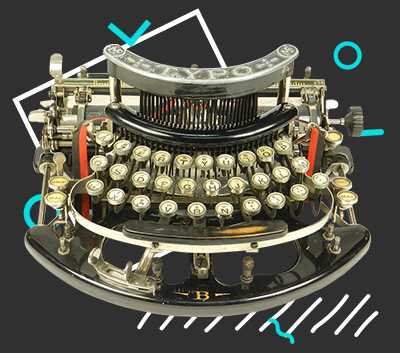 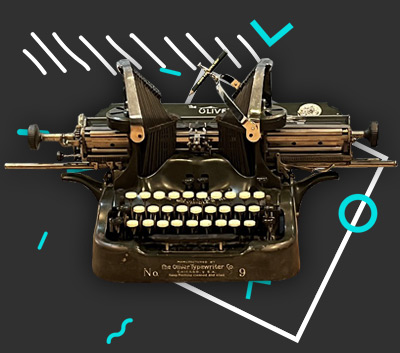 1917/1918
The Oliver Typewriter Company
The Oliver Typewriter Company was an American manufacturer of typewriters based in Chicago, Ill. It has a very original mechanism based on lateral striking, very different from the mechanism found in the usual typewriters. The machines Oliver were considered the first "visible print", which meant that the typist could see the […] 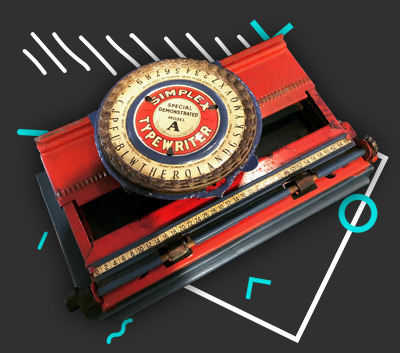 1924
Simplex
Working quietly, humbly and firmly, the Simplex The Typewriter Company of New York City managed to carve out its own little niche in the American economy for half a century. Originally, the Simplex was intended to serve as a serious typewriter for those of modest means (the price of the first Simplex It was from […] 1925
Gundka
The Gundka is a German index typewriter that began production in 1924 and produced 80.000 units. Characters are selected through a template. Of the three keys on the left, the black one is used to print the chosen letter, the yellow one the numbers and symbols […] 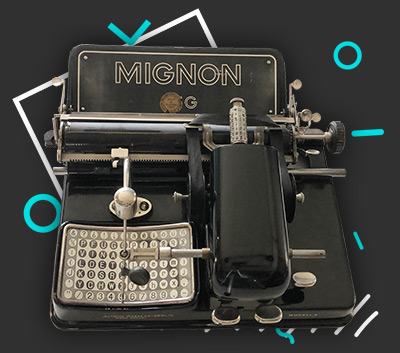 1927
Mignon
The Mignon is a typewriter invented by Friedrich von Hefner-Alteneck in 1903 and manufactured by the German company AEG in Germany from 1904 to 1934. Instead of using the levers with the letters on the tip to print the letters, it made by means of a cylinder with letters, with a twist […] 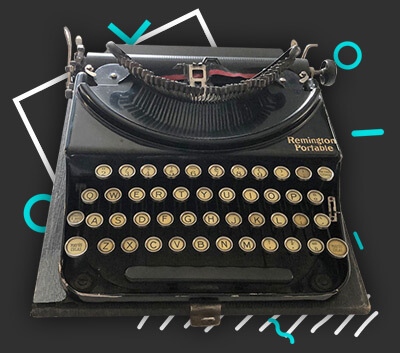 1928
Remington
These little machines were aggressively marketed and were a great success. They were the first truly portable typewriters with four-row keyboards, and in this category they had no competition until Royal and Underwood introduced the four-row notebooks in 1926. The 'folding character bar' mechanism raises the bars of [... ] 1929
Underwood
The Underwood house began making desktop typewriters in 1900, competing with another legendary letterpress company, Remington. In 1919 they released a laptop model that was considered, and still is, a true engineering masterpiece. It was a truly portable machine, since other contemporary models […] 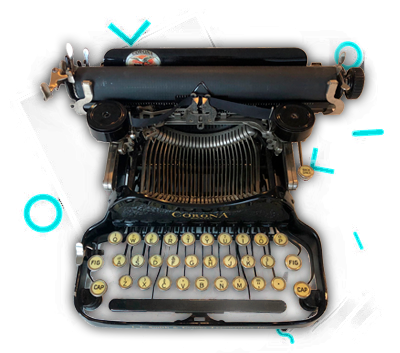 1937
LC Smith & Corona Typewriters Inc.
There were hundreds of typewriter manufacturers producing thousands of models. However, very few designs were truly successful and even fewer achieved iconic status. Such masterpieces include the Oliver by thomas Oliver, the Wagner's Standard, the Valentine de Sottsass for Olivetti and the Corona No.3 Folding […] 1946
Olivetti
It was designed in 1935 by Ottavio Luzzati, with designs by the architects Figini and Pollini (in those years dedicated to the construction of the Olivetti Complex) and the painter Xanti Schawinsky. The design took 3 years. It is the first semi-standard typewriter from Olivetti, and it is also known as the M2. It is characterized by the various colors available: in addition to the classic black, […] 1952
Olivetti
With this name, the Spanish version of Lettera 22, from the Hispano-Olivetti subsidiary, was marketed, which manufactured the best-selling models in Spain in Barcelona. Giuseppe Beccio would be in charge of designing a refined, small and comfortable writing mechanism that Nizzoli, artgraphic artist and decorator, was in charge of endowing it with a suggestive body that […] 1970
Olivetti
In 1970, Richard Burton was caught arriving at Heathrow Airport with a Valentine portable typewriter on one arm and his wife Elizabeth Taylor on the other. This image personified the territory that Valentine had to occupy, bright, sexy and desirable. Designed by Ettore Sottsass with British designer Perry King to […] 1974
Olivetti
The Olivetti Studio 46 is a portable typewriter. Designed by the architects and designers Mario Bellini, Antonio Macchi Cassia, Gianni Pasini and Sandro Palo in 1973; the first version was launched in 1974 and has an aluminum body. Later, another three came out due to the success achieved in the offices and […] 1978
Olivetti
This is one of Mario Bellini's classic designs for Olivetti's' 70s line. It is a simple, no frills, very well made and designed manual typewriter. Under the hood, it's based on Olivetti's classic Lettera series, considered by many to be the best typewriter design […] 1980
Olivetti
Italian design at its best! Designed in 1978 by Olivetti designer Mario Belinni, the Lettera 10 (and later the Lettera 12) was the first typewriter to ditch ribbon spools, using a cart8mm wide cloth tape. Much easier to use, but with […]
Cookies Settings
Technical Cookies (strictly necessary cookies)